Today, Judge Gilstrap issued his memorandum opinion granting Ericsson’s request for relief via an anti-interference injunction.  In particular, he ordered that Samsung: 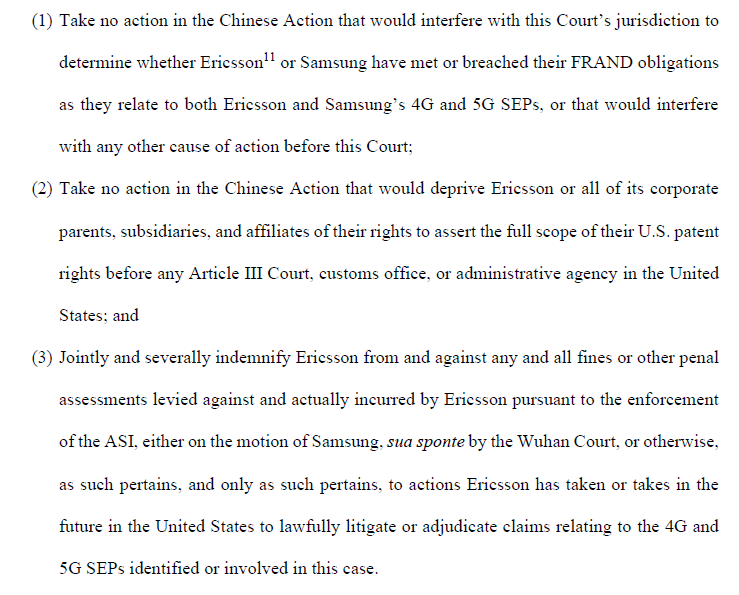 The Order followed Judge Gilstrap’s determination that all factors of In re Unterweser Reederei (“Unterweser”)—the relevant Fifth Circuit test concerning foreign anti-suit injunctions (“ASI”)—supported granting Ericsson’s requested relief. Unterweser is specifically directed to the issuance of anti-suit injunctions, rather than anti-interference injunctions, but Judge Gilstrap found the test to be instructive nonetheless. The Unterweser factors support enjoining all or part of a foreign action where the foreign action would:

No factor (including comity) is dispositive to the analysis.

Judge Gilstrap pointed out several times in the analysis that Ericsson was not seeking to enjoin the Wuhan case in its entirety; instead the relief requested was narrowly tailored to address only the Wuhan ASI and any efforts by Samsung to enforce it.  The scope of the relief requested appeared to be critical to Judge Gilstrap’s analysis. Indeed, in addressing the final Unterweser factor (discussed below), Judge Gilstrap noted that the narrow scope of the requested relief permits both Wuhan and EDTX cases to proceed in parallel and so international comity would not be offended by the issuance of an anti-interference injunction.

Regarding the first Unterweser factor, Judge Gilstrap found that the order in which the EDTX and Wuhan suits were filed “is not dispositive.” Given that Ericsson’s original and amended complaints sought an adjudication of “legally cognizable claims” under US law, the enforcement of the ASI would “frustrate the virtually unflagging obligation of the federal courts to exercise the jurisdiction given them.”

Regarding the second Unterweser factor, Judge Gilstrap considered vexation and oppression from the perspective of both suits (i.e., whether the Wuhan case would be so to the EDTX case and vice versa).  Under either lens of analysis, this factor favored Ericsson’s request.  The ASI imposed an inequitable hardship on Ericsson as it unilaterally forbid Ericsson from an “attempt to obtain redress for claims it has the right to bring under” US law.  Judge Gilstrap characterized the ASI as “akin to [] an ex parte preliminary injunction” and not a TRO of limited duration.  Conversely, Samsung would not “suffer inequitable hardship if litigation proceeds in both courts.”  And, touching briefly on due process and equity concerns, Judge Gilstrap found it notable that the ASI was issued with “no notice to Ericsson at the request of Samsung.”

Judge Gilstrap also found that the lack of legal overlap between the Wuhan and EDTX cases to weigh the second factor in favor of Ericsson.  In this respect, the Wuhan case will evaluate a global royalty and FRAND terms, while the EDTX case will consider the conduct of the parties to determine whether the parties “breached or complied with their mutual FRAND obligations.”

Regarding the last Unterweser factor, Judge Gilstrap found no prejudice to Samsung in issuing the anti-interference injunction.  If Samsung can seek injunctive relief in the US (via Samsung’s January 7, 2021 petition to the ITC regarding Ericsson’s alleged infringement of Samsung’s 4G and 5G SEPs)), then “it would be the height of inequity (and hypocrisy) to allow the ASI to tie Ericsson’s hands from doing the same.”

Addressing the indemnity provision of the Order, Judge Gilstrap explained that such a “narrowly focused” indemnification was necessary to “ensure that both proceedings can progress on the merits without the risk of unbalanced economic pressure being imposed by one party on another.”

RatnerPrestia is a law firm expert in all things IP. The Firm handles procurement, enforcement, licensing, commercialization, global strategic IP planning, and all related business aspects of IP. The Firm has attorneys experienced and successful in all relevant U.S. jurisdictions, including the U.S. Patent and Trademark Office, The U.S. International Trade Commission and Federal Courts, both trial and appellate. This expertise extends to all areas of IP protection, including patent, design, copyright, software, trademark, and trade secret protection.