Now, during the holiday lull, a series of rapid developments in a brewing dispute between two majors in the telecom industry have added a new facet to SEP disputes—the race to establish global jurisdiction in a favorable forum.

Failing negotiations between Samsung and Ericsson concerning renewed cross-licenses of each parties’ respective standard essential patents (“SEP”) directed to 4G and 5G technology led to a December 11, 2020, FRAND action against Samsung in EDTX.  Ericsson’s complaint alleged that Ericsson sought to negotiate the cross-license on FRAND terms (which included a sizable balance due by Samsung to Ericsson), but Samsung rejected those offers.

Allegedly unbeknownst to Ericsson at that time, Samsung had already secretly filed a FRAND action 4 days earlier against Ericsson on December 7, 2020 in the Wuhan Intermediate People’s Court in China.

In response, Ericsson promptly filed a request for a temporary restraining order (TRO) and an anti-ASI in the Eastern District of Texas on December 28, 2020.  Within hours, Judge Gilstrap granted Ericsson’s request without giving advance notice or opportunity for Samsung to respond.  Specifically, Judge Gilstrap’s Order, which expires on January 11, 2021, (1) requires Samsung to file an Opposition to the Continuation of the TRO or Conversion to Preliminary Injunction by tomorrow (January 1, 2021); (2) requires Samsung to indemnify Ericsson for any damages associated with violating the Wuhan Order; (3) establishes a $ 0 bond for Ericsson (contrast to 50 million RMB ($7.5M US) bond for Samsung in the Wuhan ASI); and (4) schedules a preliminary injunction hearing on January 7, 2021.  The following timeline illustrates the events of just the last few weeks as described above: 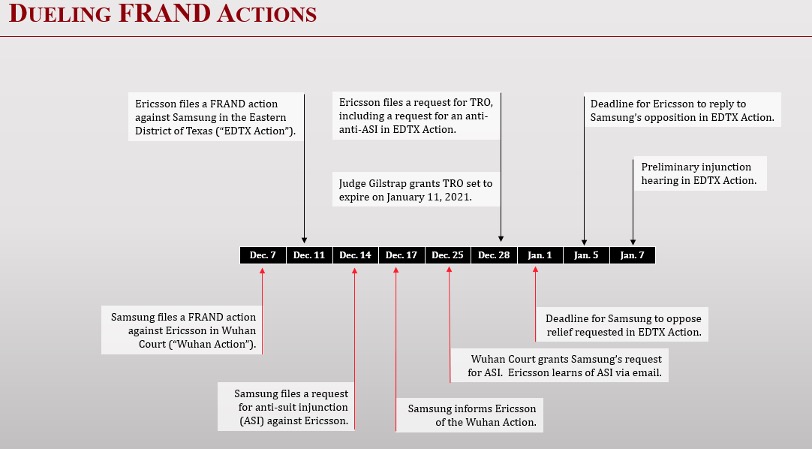 Stay tuned.  This blog post will be updated to follow subsequent developments in the Ericsson/Samsung FRAND dispute.

RatnerPrestia is a law firm expert in all things IP. The Firm handles procurement, enforcement, licensing, commercialization, global strategic IP planning, and all related business aspects of IP. The Firm has attorneys experienced and successful in all relevant U.S. jurisdictions, including the U.S. Patent and Trademark Office, The U.S. International Trade Commission and Federal Courts, both trial and appellate. This expertise extends to all areas of IP protection, including patent, design, copyright, software, trademark, and trade secret protection.