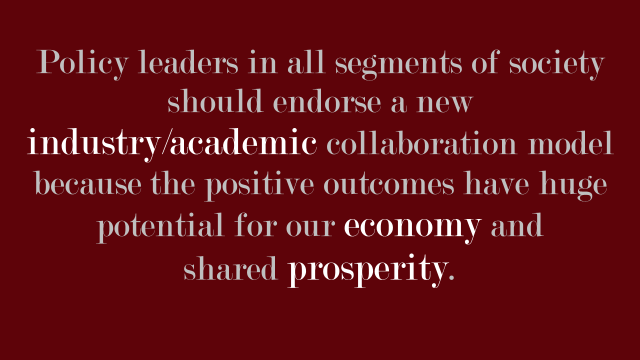 There has been a fundamental change to the research model about every 80 years since the founding of the United States in 1776.  Research and development was almost exclusively driven during the industrial revolution by private sector investment.  Then from 1862 to the outbreak of World War II, federally supported academic research was a primary driver.  The Morrill Act of 1862 established grants of land to states that were used to set up colleges specializing in “agriculture and the mechanic arts.”  That led to the establishment of dozens of land grant colleges by 1900, many of which even included “A&M” in their names.  Today there are over 70 land grant universities in the U.S.

The third model driving innovation in the U.S. came about as a result of the huge mobilization of science during WWII, and existed in the post-war era up until just the recent past.  This phase of innovation was driven primarily by heavy federal funding of both university and industrial laboratories.  Grant money to universities was substantial – think NASA, NIH, NSF, DOD, DOE, NOAH.  On the industrial side, think of Bell Labs and RCA/Sarnoff as primary examples.  The post-war era saw basic and applied research conducted at massive levels.  Today, after almost 80 years, federal funding has fallen, and the industrial labs have all but disappeared.  This latter decline was a result of a shift in modern corporate strategies which now focus increasingly on investments for later stage technologies (think < 3-5 years to commercialization).

Businesses today are shrinking lead times and demanding quicker ROI.  Most are generally not interested in funding the overhead and infrastructure necessary to support the types of laboratories that flourished from the 1940’s – 1990’s.  That reality, coupled with the fact that federal funding of basic research has remained flat (and in some cases decreased), it is clear that there is a need for a new source of basic and applied research.  The next era may well be industry-academic collaboration.  Although this model is gaining traction, it has not yet been fully embraced.  There are reasons for this, some of which will be discussed below, as well as some thoughts on the solutions.  Initially, however, I assert that policy leaders in all segments of society should endorse this new model because the positive outcomes have huge potential for our economy and shared prosperity.

So why has this new partnership model not yet been fully embraced?  In a word – culture.  Modern business drivers and traditional academic priorities have historically not been completely aligned.  But today those paths are converging, and it is precisely because stakeholders are seeing that the partnering of the two institutions is so necessary at this moment in history.  The big picture is that although the short term future is defined by incremental improvements already in the works, our long term future will be defined by wholly new technologies which can only come from basic research extended into development and commercialization.

Whether you are already in an industry/academic partnership, you are contemplating entering into such a partnership, or even if you are not yet on board with the benefits of such a partnership, here are some ideas that you might consider implementing into your organization to accelerate the development of new technologies.

The success of any industry/academic partnership is rooted in trust.  Both sides should view it not as a single, arms-length transaction with an end date, but rather as on-going, long term relationship.  Leadership on both sides bears a responsibility to modify what were in the past very real differences in approach and perception.  The next 80 years of prosperity may depend on it.

Jonathan H. Spadt is an attorney, engineer and CEO of RatnerPrestia.  He is an expert on global innovation, intellectual property law, trade-related aspects of IP, and global supply-chain IP strategies.  With an established worldwide reputation as more than an attorney, but a counselor and policy developer, he has a broad view of economic and trade policies that interact with intellectual property law and policy.  He routinely writes and lectures throughout the United States and Europe in both the private and public sectors, and actively participates in policy discussions relevant to trade and IP law.