A Rational Approach to Corporate Decision Making in Today’s World 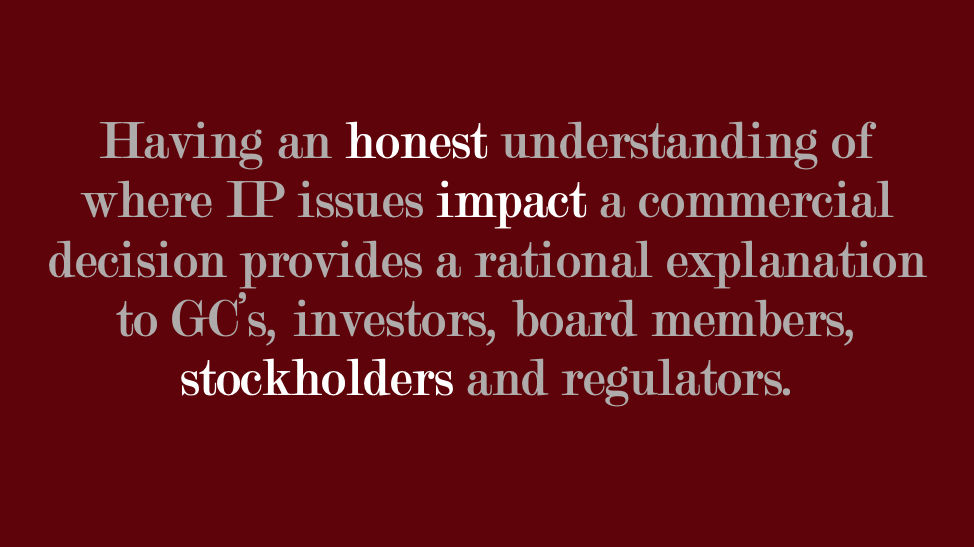 The current level of disruption to established frameworks in trade, economics and intellectual property law is unprecedented.  Making business decisions in today’s geopolitically unstable environment requires a controlled, analytic approach that focuses only on the most important variables and outcome determinative factors.  But how does a decision maker assess which factors should be included and which can be second-tiered or even disregarded?

The unprecedented complexities of today’s global business environment dictate a very deliberate prioritization and analysis of the issues that will have the greatest impact on success or failure.  Trying to consider all of the moving parts at once paralyzes the process.  If you are an innovator, IP protection is a key variable.  But it may rank other than first in terms of importance.  It might not be second or even fifth.  You have in front of you the most dynamic market in recent history:  U.S – China trade uncertainty and the impact of that uncertainty on the transatlantic relationship;   Japan – South Korea trade tensions and the impact of those tensions on investment in Southeast Asia; The political stagnation of the U.S. Mexico Canada Trade Agreement (USMCA) in Congress;  Brexit;  U.S. patent law changes (including an overall reduction in patent value, and loss of important subject matter eligibility);  The U.S. November 2020 elections;  The ever-changing cyber environment and associated vulnerabilities;  Accelerated changes to national security policy, including more focused export control given seamless global data movement;  Labor availability;  A slowing EU economy (importantly, Germany in particular); and Increased government oversight of foreign investment (In the U.S., the Committee on Foreign Investment in the U.S. (CFIUS); and in Germany, the Foreign Trade and Payments Act), to name just eleven of the largest.

Although many of these uncertainties are intertwined, and far more complex than the simple list above, smart decisions can be made if smart assumptions are defined.  A “smart” assumption is one that is based on an articulated rationale, which can be tested at its inception and again over time.  And because not every uncertainty has the potential to impact your business equally, a prioritization has to be made, with the assumptions underlying the higher priorities given more rigorous attention.

For example, if you are deciding whether to move any of your IP and associated data into China, considering how you might protect it might not be the best use of resources if you assume that the Chinese government is going to cause the transfer of that IP and data to its state-run enterprises (and by virtue of that, the government and military).   One rationale for this assumption is the simple realization that China will not at any point, in at least the next 10 years, respect IP to the same extent as the west, regardless of whether any trade agreement is reached.  It has been, and will be for the foreseeable future, a state-run economy.  This assumption is also supported by other major market participants in the world.

The Federation of German Industries (BDI), a leading German industry group, earlier this year published a paper with 54 stated ideas for how the German Government and the European Commission can strengthen the EU in the face of competition with China.  The paper is titled, “Partner and systemic competitor – How do we deal with China’s state-controlled economy?” and asserted that, contrary to what was previously expected, China will not develop into a market economy or embrace liberalism in the foreseeable future.   “The People’s Republic is establishing its own political, economic and social model,” said Deter Kempf, BDI President.  And it is worth remembering, as well, that the new European Commission President is Ursula von der Leyen, a German.  So it may be that some of the paper’s positions could get an audience in Brussels.

A second rationale for this assumption is the understanding that China is not only interested in access to the IP, but to the data itself.  In some cases, China has asserted the need to access data under a national security argument.  Where the data is protected by IP, the Chinese government has forced the IP owner to provide access to its IP as well as the data.  In other words, it was necessary to disclose the IP in order to make the data accessible.  In other instances, China has said it needed access to the IP simply as a political precondition to allowing the operating company to do business in China.  And to date, nothing in the government’s behavior would suggest a change to this policy.  Consequently, these historical realities support this assumption.

None of this is to say that remedies for patent infringement do not exist in China; they do and are improving.  But if the consideration for your business is whether you can afford to have your IP and data disclosed to the Chinese government, and by virtue of that to competitors in China, you would be well served to simply assume that it will be.

What if you are in the automotive sector and considering where to place your company’s new manufacturing and R&D facility?  If Mexico and Germany are two of your considerations, IP protection is likely not a high priority in terms of your decision making because the IP laws in Mexico and Germany are both reasonably reliable (if not necessarily equal).  In this case, two prioritized issues are probably USMCA and availability/cost of labor.   Availability and cost of labor is on the one hand a stand-alone issue.  But it also ties into the USMCA.  For example, the agreement calls for a new labor value content (LVC) rule that, if met, avoids heightened duties.  That proposed rule requires that 40 percent of a passenger vehicle, and 45 percent of a pickup truck, must be made by workers paid at least $16/hour.  It is possible for manufacturers to earn a 10 percent credit toward the LVC from R&D and IT work done in the region where the production takes place, and a 5 percent credit toward the LVC for assembling the vehicle in a defined high-wage region in North America.  So the place of manufacture, R&D and IT development are a factor on labor costs, which of course are weighed against the tariffs that would go into effect if the LVC amounts are intentionally unmet.  It should also be noted that the USMCA proposes changes to rules of origin for auto parts and textiles as well.  So depending on your industry, changes to costs of production if the USMCA is ultimately implemented need to be considered.

As noted above, however, the USMCA still awaits ratification by the U.S. Congress.  Mexico ratified it this past June, and Canada is moving ahead with ratification, although it is likely awaiting movement in the U.S.  When or if that happens is uncertain.  So what assumption must be made with regard to its passage?  Because there are only a few issues that seem to be preventing is ratification in the U.S., and those are mostly political given the current state of affairs in Washington, D.C., it is probably more a question of when, not if.  And if any changes become necessary for its passage, those would likely be in the pharmaceutical and environmental sectors.  The only remaining sticking point to the extent labor is involved is the enforcement of the labor provisions, more than the substance of those actual provisions.  If it is not ratified by the end of 2019, it probably won’t be until after the November 2020 election.  But at some point it is likely to go into effect in largely its current form.  Given the importance of a North American free trade agreement to the agriculture and automotive sectors, and a general agreement that NAFTA is outdated, some form of the USMCA is likely to be ratified within the next 18-24 months.

A quick note on tariffs.  German GDP contracted in the second quarter of 2019, and Chinese unemployment increased in that same time.  The current administration knows these vulnerabilities and believes tariffs are a useful tool.  Germany knows that it could be next to be hit with higher tariffs.  Some there even expect it.  It is a smart assumption that until the transatlantic and transpacific trade framework stabilizes, the use of tariffs by the current administration is going to continue.

As IP budgets continue to trend down due to a variety of factors, the value of the IP strategy returned can be enhanced by providing decision makers with justifiable frameworks that contemplate the role of IP utilization in a broader context.  The above issues and examples are just illustrative of the complexity of decision making in today’s world.  Having an honest and realistic understanding of where IP issues impact a commercial decision provides a rational explanation to GC’s, investors, board members, stockholders and regulators.

Jonathan H. Spadt is an attorney and CEO of RatnerPrestia.  He is an expert on global innovation, intellectual property law, trade-related aspects of IP, and global supply-chain IP strategies.  With an established worldwide reputation as more than an attorney, but a counselor and policy developer, he has a broad view of economic and trade policies that interact with intellectual property law and policy.  He routinely writes and lectures throughout the United States and Europe in both the private and public sectors, and actively participates in policy discussions relevant to trade and IP law.